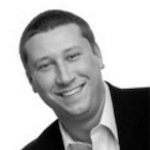 The Future of the Political Mediascape

Barkett, 36, will speak to SFPRRT members about threats to our political infrastructure while sharing war stories from the battlefield. He also served as Jeb Bush’s CTO during the 2016 presidential campaign and worked as an engineering leader at Facebook and Google.

Don’t miss a fascinating look at how data and AI are rocking politics, and for that matter, everything else.