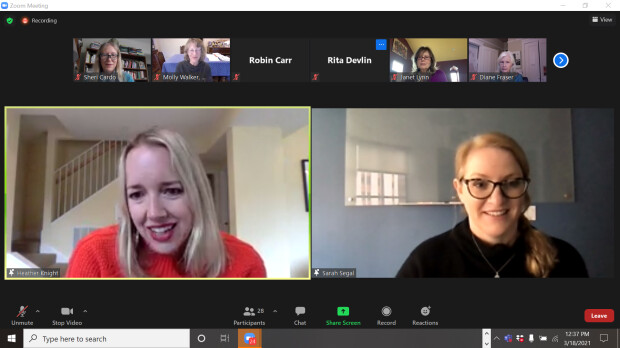 On a dreary, rainy March afternoon, Heather Knight brought her boundless love of the City by the Bay to SFPRRT. Speaking with moderator Sarah Segal of Greenbrier Segal, Knight shared insights into her life as San Francisco Chronicle columnist, co-host of the Chron’s “Fifth and Mission” podcast, and co-founder of #TotalSF, a campaign that celebrates “the wonder and whimsy of San Francisco.”

While Knight’s twice-weekly column has become beloved of readers, she never aspired to the job. She joined the Chronicle fresh out of college, spending eighteen years as a reporter. Tapped for the columnist role after a colleague retired, Knight faced a steep learning curve – and with no transition period, she headed to the City Hall press room and jumped right in.

As Knight explained, the two jobs are very different. Reporters have one beat, like the Giants or the Mayor. They write factual, objective copy. Columnists, on the other hand, can choose to write about anything that relates to their general topic – in Knight’s case, the City – and include opinions.

She has grown to love her role and the added impact it affords. “As a columnist, I can effect change,” says Knight. “I have the opportunity to show what’s not working and explain what can work better.”

Finding stories that resonate with readers

As an SF resident covering the City, Knight finds stories in her daily life: riding MUNI, parenting, interacting with the schools, owning a home. Like any journalist, she develops sources at City Hall.

Knight cites her readers as a valuable source of tips, like the Lombard Street resident who repeatedly witnessed brazen car “smash and grabs” targeting tourists. Frustrated, the reader invited Knight and a Chronicle photographer to her neighborhood. As they spoke with construction workers who’d also witnessed thefts, they noticed a nondescript car with paper plates circling the block. Within seconds, a thief jumped out, smashed a car window, grabbed a backpack, and drove off. The photographer got amazing shots – so crystal-clear that the story not only ran on the front page but also led to an arrest.

Another reader tip led her to a Castro bagpiper who serenaded his neighbors during shelter-in-place, climbing on his roof to play a nightly song for 111 evenings straight. Knight joined him one evening, capturing photos and video, and returned for the 111th night and a St. Patrick’s Day encore performance. “One of the joys of my job is keeping in touch with people and making friends,” she says.

Knight occasionally works with PR practitioners. Recently, SFPRRT member David Perry pitched a story about the hotel industry’s dire straits during the pandemic. Together, Knight and Perry came up with an intriguing idea: exploring the storied St. Francis Hotel, open for business but a veritable ghost town. Her recommendations for PR practitioners: when pitching, come with creative approaches that get the news across.

A city worth fighting for
While Knight describes herself as “wired for optimism,” she is committed to covering difficult content and keeping it front and center. “By highlighting what isn’t working and what is, I hope my readers will remember that San Francisco is a special place, and it’s worth fighting for,” she says.

She points to the huge toll of overdoses in San Francisco, fueled by an open drug market in the Tenderloin and the lethality of fentanyl. In a 2020 column, she highlighted the fentanyl overdose of “Princess Leia” – a homeless woman well-known in the Castro for wearing her hair in rolled braids. Her demise highlighted the lack of treatment and the lack of consequences for those who sell illegal drugs.

Another topic close to her heart: the low pay and lack of affordable housing for public school teachers. After many years of writing about the topic, she found a math teacher who had slept in a homeless shelter because she couldn’t find a place to live. A few days after her column appeared, then-Mayor Ed Lee designated $44M to build teacher housing, now in development.

What’s ahead for San Francisco
With her characteristic optimism, it’s no surprise that Knight continues to place her bets on San Francisco. “The City is famous for rebounding after every disaster,” she says, pointing to the Roaring Twenties that followed the Spanish flu. With the bubble popping in the rental market, she sees the opportunity for SF to become a place where teachers, bartenders, artists, and nonprofit workers can afford to live. And while she’s enjoying a more flexible schedule, she looks forward to heading back to the newsroom.

To reach Heather, send an email to hknight@sfchron.org or send a direct message via Twitter (@hknightsf) or Instagram (@heatherknightsf).

Enjoy this recording of the event. For information on future events so you can join us live, register for our newsletter at the top of this page.