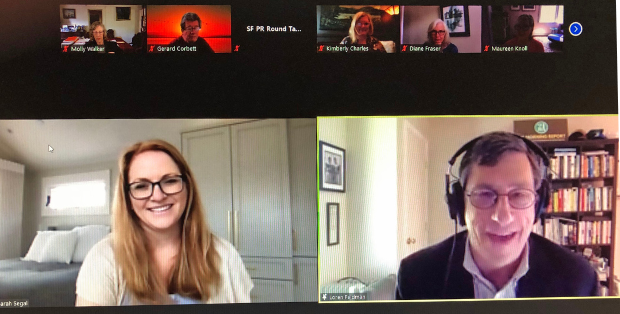 On June 16 Sarah Segal of Segal Communications interviewed Loren Feldman, a seasoned journalist who has covered entrepreneurship for The New York Times, Inc. and Forbes. Loren describes his own foray into entrepreneurship, building the online small-business community 21 Hats, a content site that delivers a daily newsletter, the 21 Hats Morning Report, the 21 Hats weekly podcast, as well as webinars. The focus of the conversation was on what’s leading journalists like him to turn to the Substack newsletter publishing platform. (Scroll down to view the full recording of the interview.)

So what the heck is Substack?

Substack is a startup that hosts a community of newsletters—some free, some that sit behind a paywall. It’s a one-stop site where journalists and bloggers can monetize their content or get discovered. Substack makes it easy for authors to deliver their custom newsletters to subscribers’ in-boxes. Of special note for PR professionals, the newsletters are searchable by topic, or by performance. And because the Internet knows all, you can search for Substack newsletters from people you follow on Twitter.  The newsletters cover hundreds (perhaps thousands) of niche and broad topics. Authors can offer their newsletters for free, get paid by sponsors, or charge a subscription.

As Loren explains, as more journalists lose their jobs, or fear the same, rather than look for their next gig, they are monetizing their readership and subject expertise by creating content in a direct-to-consumer subscription model. Since leaving Forbes in late 2018, Loren partnered with an investor to create 21 Hats. He went solo in October 2020, and quickly joined Substack to publish his newsletter, the 21 Hats Morning Report. While there are other platforms such as WordPress and Medium for publishing content, he didn’t want to get stuck with the “Betamax” of platforms. With its hefty investments from the venture capital firm, Andreessen Horowitz, Substack seemed a good bet to Loren because it’s popular with journalists, is gaining momentum, has a clean interface, and is super easy to use.  Loren claims that you can set up an account with “two clicks of a button,” and the platform makes it easy to upload your current subscriber list. If you choose to set up a paywall, all you need is a Stripe account.

Loren’s 21 Hats Morning Report is delivered daily via Substack and summarizes the important news of the day for business owners by aggregating articles across the web. Offered in bite-size pieces, each story has a link to the original source. Occasionally, blog posts are offered by entrepreneurs who are struggling with a business decision, such as “should I go sell in Costco.”   The Morning Report has 5,000 subscribers.

The 21 Hats newsletter has been available for a couple of years, but as Loren explains, the pandemic really proved the value of its content. For instance, a compendium of information on securing PPP loans, as well as advice on anything from when and how to leave Amazon or how to hire, helped business owners navigate their businesses during the new world order.

The weekly 21 Hats podcast follows the experiences of six to seven business owners who offer unfiltered views of their business challenges and successes.  The podcast started before the pandemic, but with the disaster, Loren says the conversations became emotional and interesting—some of the entrepreneurs had more business success, others did OK, while others were fighting to survive, and listeners became involved in their business journeys. For instance, the owner of a chain of hair salons in Detroit didn’t think she would survive the pandemic but was saved by a grant. She is now pivoting to franchising. As she makes the transition, she’s facing FUD—Fear, uncertainty, and doubt. On the podcast, the 21 Hats business peer group offer support and advice.

How to work with Loren

No news here: make your pitches relevant. Loren reads every email, but his favorite PR people understand his niche and come to him when they have something appropriate. He’s interested in hearing stories about small-business owners who are willing to be transparent about the challenges of being an entrepreneur–what goes wrong, what goes right, and advice on what they learned along the way.

He is also building original content for webinars, so share news of clients with subject matter expertise such as better ways to hire and retain employees, how to sell on Amazon, or mastering Google’s Pay-for-Click.

What do you think about Clubhouse?

Not a whole lot to say. While he was excited about it initially, he has limited time to invest in it, and hasn’t cracked the code. However, he sees some value. A friend joined a podcaster room on Clubhouse and all the members committed to promoting his friend’s podcast with their followers.

What’s the future of journalism and job security?

It’s hard to know what the future for journalism is; the media business is chaotic. Loren sees the dawn of independent journalists leveraging their followings with newsletters.  A big plus: newsletters are a great and intimate way to connect with your readers.

Some journalists are turning to Substack out of strength, others, out of desperation. Some were getting paid well by traditional media but are doing even better on Substack.

Loren is especially worried about the future of local news and expects that newsletters will fill the void, with Substack possibly being part of the solution.

Your thoughts on the Pay-for-Play journalism trend?

Loren believes that contributed content, sponsored posts and native advertising are all fine so long as it’s disclosed prominently. But for him, Pay-to-Play connotes sponsorship is hidden and it shouldn’t happen. However, the contributor model is a gray area. Loren has a long history working with contributors. At The New York Times, he managed, edited and published contributed content from a mix of journalists and business owners. At Forbes he managed a completely different model where he was in charge of around 180 entrepreneur contributors. He replaced many of them, but it was impossible to manage that many, let alone edit their work. Forbes vetted the contributors, but once they were approved, they were given the “keys” to publish directly to the platform.

What makes for a good, contributed piece?

Being genuine! Loren shared the story of the best pitch he ever received was from Paul Downs. During the 2009 recession Paul saw his business take a nosedive and told Loren that he would share the details of the downward spiral and what it was like to head towards bankruptcy. As it turned out, his business survived and Paul continues to share stories about his business learnings—for instance, a recent Google Pay-for-Click mistake halted orders for a few weeks. Once he discovered the problem, he explained what went wrong and how he fixed the problem in minutes.

Will we see more media paywalls?

“Yes, and that’s a good thing,” explains Loren. In Germany, publications are supported by subscribers rather than advertisers. “Cheap subscriptions don’t pay for anything and force the publication to rely on advertisers,” says Loren, forcing publications to make compromises. The New York Times took two years to make the decision to put up a paywall—executives feared losing readers, and subsequently, ad dollars. In the end, the paywall expanded their subscription base. Loren would love for 21 Hats to be supported by subscriptions alone!

Did you look at other platforms before choosing Substack?

Setting up Substack couldn’t be easier. It’s easy to publish, add links, photos and videos. There are some limitations on what you can do with typography. It’s also a great platform for those who are not building a business but want to share a passion or expertise once a week or month. There are some new competitors now, with slight variations in biz models.

You wrote for George Magazine. Could a bi-partisan publication be revived?

Loren wrote for George during its last year (2000). He believes the publication had some great stories but was ahead of its time, covering the intersection of politics, entertainment, and media—but it never got a solid following. “A magazine that is bi-partisan is challenged to find a following, probably more so today—the problem with writing down the middle is that you can be really boring.”

Does Substack subsidize some of its journalists?

Loren is not aware of any journalists being subsidized. However, he does believe that some well-known writers are receiving advances against future earnings.

Loren is a fan of their business publication Marker but it’s had a lot of editorial turnover. Medium also has a newsletter capability, but he believes they are late to the game, and not offering anything compelling for people to make the move from Substack. Yet there’s lots of movement in the space with new competitors all the time, including Facebook, which is rolling out its own newsletter platform.

Do Forbes contributors do pay-for-play?

To his knowledge, no. There is a danger that a contributor could be paid to write a story. It’s not widespread and is not sanctioned. If discovered, the contributor would be expelled from the platform.

Enjoy this recording of the meeting: