Paul von Beroldingen might have made a career as a jazz pianist. Instead, he became an award-winning communicator whose client list ranged from small family enterprises, law firms and nonprofits to international corporations. Over a four-decade career in public relations, his work for clients included both traditional and online media communications.

Paul died Saturday, April 2, from a series of debilitating health conditions. He was 77.

With an undergraduate degree with honors in speech from the University of California at Berkeley and graduate courses in broadcast communications from San Francisco State University, Paul began his career in news at KCBS and production at KGO radio, gaining skills that would serve him well in public relations.

He launched Bay City Public Relations in 1970, which quickly became one of the leading independent agencies in San Francisco. His diverse client list, which included corporate giants like Chevron Chemical, Ampex, and Liquid Air, as well as California Child Health and Disability Prevention Programs, KOIT Radio and the San Francisco Council of District Merchants, benefited from his insider’s understanding of news media, as well as his cost-conscious approach. 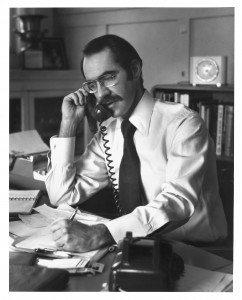 “When Paul had news to distribute via Business Wire, he always wanted to discuss all the possible news channels first,” Janet Lynn, longtime Business Wire client representative said. “He wanted the best choices and results for each client, using their budget as wisely as possible. He cared deeply about getting things right.”

“He was a consummate professional,” said Rhonda Silva, a PR professional who ran a media training and consulting firm that worked with Paul. “His clients always got more than they bargained for [expected]. He was such a gem.”

He also turned clients, employees, and vendors into friends, treating them to lunches or other celebratory gestures when campaigns went well. One employee, Lisa Stockwell, who started her career at Bay City PR, has never forgotten the season tickets to the SF Symphony he gave her for Christmas. “He was extremely generous and  wanted to encourage my appreciation of music,” she said.

He left Crown Zellerbach in 1986, to get back to independent public relations consulting (PvB Public Relations) and media training. He loved the challenge of one-on-one interaction with clients and the media that covered them.

In fact, the bigger the challenge, the better. An example was Paul’s work for the historic San Remo Hotel in San Francisco. A popular option for tourists and an institution in North Beach, the hotel’s regulars over the years included local celebrities such as Joe DiMaggio, who frequented the restaurant. When the City of San Francisco and hotel owners Tom and Robert Field squared off in a now-landmark property rights case, they engaged Paul’s public relations expertise as the case wound through the legal system for over 10 years. It  eventually was heard in 2005 in the U.S. Supreme Court. The media coverage could have been filled with landmines. Instead, while the owners ultimately lost the case, they won in the court of public opinion.

“Paul did a fantastic job—I never had a bad press interview thanks to his media training,” Tom Field said. “Our case is in all the law books. Although we lost, our position was vindicated in 2019 by the property rights victory in Knick v. Township of Scott.”

Paul was the quintessential San Franciscan, always elegantly attired in a suit or sport coat. He enjoyed sharing the history, culture, public affairs, and arts of the city he loved and in which he lived most of his life.

I met Paul when I was district chair (of PRSA) and drove around the district,” said Kathy Hubbell. “I never stopped being thoroughly impressed by him; never stopped enjoying tales of San Francisco that we would swap.”

“He was the ultimate supporter of PRSA,” said Mary Lou Thiercof, a colleague who worked with Paul to merge the East Bay and San Francisco chapters. “When he was president of the SF Chapter, he melded the East Bay Chapter with SF by appointing me to the SF board. And he attended our events in the East Bay.  He was such a generous soul, mentor, and history-keeper.”  Paul also led a  successful initiative to hire an administrator for the San Francisco Chapter. Colleagues credit him, along with Peter Magnani (longtime public relations manager at Bank of America) with helping the organization to survive. “We called them ‘the saints of PRSA,’” said Silva.

“Thanks to Paul and Peter Magnani, PRSA San Francisco exists,” said Mitchell Friedman, a professional colleague. “Their leadership in the early 2000s kept the chapter going during challenging times.”

Among his many talents and interests, Paul was a gifted jazz pianist. “He was my first boss and quite the character back then,” said Stockwell. “Often, he would be playing jazz piano when I arrived for work in the morning. He said he might have made a career as a jazz pianist if it were not for his allergy to cigarette smoke, which was integral to the nightclub scene at the time.”

He also was a ballroom dancing devotee until back problems sidelined him. His love of dancing led him to work with Cheryl Burke Dance, a dance services company with a large network of ballrooms in Silicon Valley. “My husband and I went dancing with him, and I’ll never forget how completely transformed he was,” said Silva. “He was an amazing dancer.”

Friends of Paul have established a GoFundMe campaign to cover the costs of a memorial gathering and placement of his obituary in the San Francisco Chronicle, as well as other expenses related to his death: https://gofund.me/180e2d96

The memorial gathering will take place on June 18, from 4:30 p.m. to 7 p.m. For details and to RSVP, please contact Hatti Hamlin (hattihamlin@comcast.net).