I just finished serving on the SFPRRT scholarship committee for the first time, evaluating scholarship applications and resumes and interviewing candidates.

To be considered for a scholarship, applicants must have a 3.5 or better GPA; major in communications/PR or related field; show considerable involvement in the field beyond the classroom and dedication to the field long-term; and exhibit a deep understanding of PR, social media techniques and the like.

I enjoyed hearing about how candidates are following their dreams of a career in public relations and marketing. I also loved getting to know my fellow PRRT members including our highly-organized chair Brenda Kahn as well as Gerry Corbett, Irina Efremova, Hatti Hamlin, John Knox and Eric Steckel.

Our scholarship winners with their advisors and Scholarship Program Chair Brenda Kahn.

A communication major, Christina is set to graduate this May. She is active in the public relations field on campus and off, serving as a social media reporter for the school’s Office of College Communications, and last summer as a Junior Giants ambassador for the San Francisco Giants Community Fund. On her own initiative she produced a moving film promoting the Junior Giants youth baseball teams. To cover her hefty tuition and school costs, she now works nearly full-time for the Giants organization while attending school and also serves as a resident adviser for the dorms.

Ashley is majoring in communications studies, with a minor in public relations. She has been recognized several times as a leader on campus, receiving the school’s Emerging Leadership Award. She was also chosen to attend a leadership retreat and to represent the school at another leadership event. She is vice president of her sorority and works as a resident adviser for USF Student Housing, where she creates programs to encourage students to engage in the college community. She also works in the USF Student Leadership and Engagement Office, collecting and publishing information on student events and managing social media accounts. 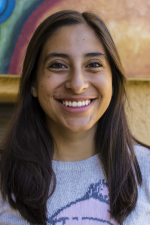 A first-generation college student who hails from San Antonio, Texas, Patricia covers her own tuition and living costs with financial aid, scholarships and jobs during the school year and summers. She has been selected as a Hispanic Scholarship Fund Scholar three years in a row and has worked as the marketing and publicity coordinator at El Centro Chicano y Latino on campus for the past two years. A junior majoring in communication, Patricia landed two impressive paid summer internships in the PR field: as a public affairs intern at the Federal Reserve Bank of Dallas, and as a multimedia and journalism intern at NASA in Greenbelt, Maryland. She spent this past winter quarter in New York City doing a domestic study abroad program and serving as a marketing intern for a nonprofit. One of her goals is to establish a mentorship program for high school girls who are interested in marketing, public relations and advertising.

Aungli is a public relations major with minors in human rights and women’s studies. The scholarship means a lot to Aungli, since she has had to largely cover her college expenses herself. She participated in a journalism study-abroad program in Greece and Germany this past summer that focused on the refugee crisis in Europe and found it to be eye-opening and life-changing. Upon returning, she resolved to use her public relations skills to serve a greater cause by creating narratives that drive readers to care. She hopes to effect positive change by working with nonprofits and intergovernmental organizations — and eventually the United Nations —  to address the challenges facing the global community.