Two longtime Round Table members have been named Life Members by the Round Table Board of Trustees.  Beverly Butler Rose, APR, ABC, retired in early August as senior vice president and department head of Customer Experience Communications, Treasury Management, at Wells Fargo, and Blodwen Tarter, PhD, retired in late August as chair of the Marketing and Public Relations Department at Golden Gate University (GGU). Both are former Round Table Chairs.

We congratulate Beverly and Blodwen for this honor, which recognizes retired members who have contributed with distinction to our organization over time. Both honorees provided exemplary leadership and service, and are frequent attendees at our events. We look forward to continuing to engage with them and to benefit from their valuable experience and perspective.

We asked them to share some reflections. Please view their profiles below. 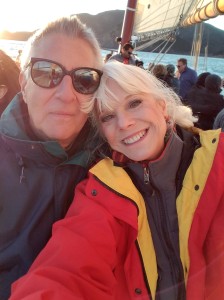 Longtime PR Round Table member Beverly Butler Rose, APR, ABC, led Wells Fargo’s Treasury Management Customer Communications team for 12 years. She also worked at Fireman’s Fund Insurance, American Cancer Society, The Gap, Pacific Telesis, The American Red Cross, The Rockport Company, Brooks Athletic Shoes, and as a reporter and producer for WOTV in Grand Rapids, Michigan. She has been generous with her time and energy over the years and was responsible for recruiting many excellent speakers for our lunch meetings, introducing and moderating conversations with speakers, rounding up theater ticket donations for the annual auction, and other contributions.

How many years were you a member of the Round Table? This is my 32nd year with PRRT. I joined when I worked at The American Red Cross, my first job in California after moving from Massachusetts where I was VP of Marketing for Rockport Shoe Company. Larry Shushan (then with Chevron) was my sponsor.

What Board or committee roles did you fill? I think I did almost everything except Treasurer: I was Program Chair for two years, Chair for a year, worked on the Scholarship Committee for a few years, organized the holiday party the first year we were at The Westin (Janet Lynn and I found that place!), put on the 75th anniversary event, and chaired the Membership Committee for four years.

Why was it important to you to get involved? I really loved having a group of senior PR people to brainstorm with. They were all so smart and accomplished! I was able to recruit many of the members to join a volunteer Emergency Communication team when I was at Red Cross to respond to major events: I thought it would be an earthquake but the first crisis was the East Bay Hills Fire and dozens of PRRT members who were part of the volunteer group helped out. Larry Kamer staffed the shelter that the Governor visited, and others wrote news releases, and kept the media updated on houses destroyed. What a time that was! John Knox and I were just reminiscing about it.

How do you feel, having retired? Any comments? I feel elated that I will have time to work on my own creative projects now. I learned so much from the varied industries I was involved in, so it’ll be fun to use some of those stories in my writing. I will change names to protect the innocent (or guilty)!

Any particular advice to people starting in the PR profession now? Learn to write and write really well. Never pass up the opportunity to meet and engage with interesting people, and always be willing to help someone else on their career path.

How did you manage to maintain a corporate life, be a parent, and pursue your craft as a writer and playwright? Prioritize. My kids always came first…the twins were born in 1994. Second was always my job. I was the breadwinner so I did have to take it very seriously, put in the long hours, and do a lot of travel. My creative stuff always came last…but once the kids were older I wrote my first novel and had three of my plays produced (Actor’s Theatre in Grand Rapids, MI, and Exit Theatre and Shelton Theatre in SF).

What now? I was recently married and my husband Dennis and I are moving to a four-acre farm in Portland, Oregon. I’ve found a writing community there and plan to keep creating stories, and raise a few chickens!

Read an essay Beverly wrote about her recent move to Oregon, published in the Marin Independent Journal in August 2020.

Blodwen Tarter on a trek in the Cordillera Blanca, Peru

Blodwen Tarter has more than 25 years of experience in marketing, public relations, product and systems development, and strategic planning in the financial and information technology sectors. She has worked with companies including Mead, Knight-Ridder, Charles Schwab, Ziff Corporation and Wells Fargo. She has guided, mentored and worked with countless students and faculty throughout her tenure at Golden Gate University (GGU), where she began teaching part-time in 1992 and full-time in 2006.

In addition to her exemplary Board service, Blodwen has made GGU’s facilities available for both member and Board meetings and scholarship interviews, and has been generous in providing GGU students and volunteers to support us during onsite and offsite meetings and events—particularly our annual fundraising gala. Through her role as GGU Marketing and Public Relations department chair, she introduced a layer of academic vigor and legitimacy to the Round Table, funneling many scholarship winners and future members to the organization.

How many years were you a member of the Round Table? I joined the Round Table in 2008 at the invitation of Gary Tobin, then the chair of the Scholarship Committee, who personally reached out to faculty at different San Francisco Bay Area universities, including Golden Gate University.

Why was it important to you to get involved? I value the purposes of the SF PRRT: to provide professional development opportunities for PR professionals and to support the development of the next generation of PR leaders via the scholarship program. The speakers have been interesting and varied—I always learn something. An unanticipated bonus of SF PRRT membership was a direct outcome of attending a SF PRRT luncheon. I write teaching cases about marketing and PR that instructors use in the classroom. The SF PRRT speaker discussed the centennial celebration for the San Francisco Symphony, which became the focus of an award-winning case I wrote. Later published in a case book, the case has been used by instructors all over the US.

I could never serve on the Scholarship Committee itself due to a potential conflict of interest, but I have been invested in helping PR students move into their professional careers. As an aside, I am very proud that GGU students have been recognized with SF PRRT scholarships every year, save one, since 2006 when I first became aware of the scholarship program. In the GGU archives I found a plaque with the names of GGU winners from the 1990s.

Equally important, I find the members and guests of the PRRT very congenial. I really like and respect most of the people whom I have met through the PRRT. I consider my affiliation with the Round Table one of the most serendipitous consequences of my academic career.

How do you feel, having retired? Great, absolutely great. I will never be bored and I will never run out of things to do or opportunities to learn. My recently-retired sister says I have joined the cool kids club. For a more informed view, ask me in a month.

Any particular advice to people starting in the PR profession now? Learn to write clearly, succinctly, and quickly. This skill will always stand you in good stead. Be curious. Survey the entire world for information. Read everything and read critically. Pulling together trends and stories that are unique is often based on being able to find the coherence from disparate fields and people. Be a critical thinker; evaluate your sources, and base your perspectives on evidence. Don’t create or regurgitate fake news. Above all, be honest, transparent, and ethical.

What now? I am looking forward to more unscheduled time for a variety of projects. The original plan was for lots of travel. Pandemic permitting, at some point in the (near) future my husband and I will head off for more distant travel. Morocco, Cuba, the coast-to-coast hike in England and another trekking trip to Peru are on the list.

I have a number of ideas for volunteer work. As a professor emerita, I am committed to continuing to work with my doctoral students until they finish their dissertations. Who knows how long that will take? But it is quite different from teaching a 15-week class that meets regularly. Of course, trashy novels and dark chocolate are always an option.