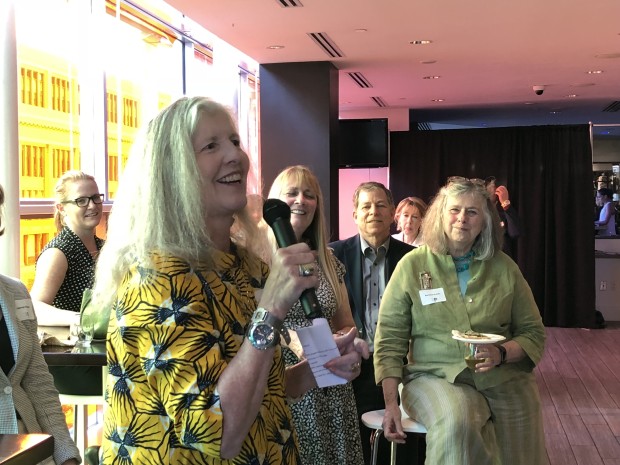 Veteran SF Chronicle columnist Leah Garchik was the speaker at the PR Round Table’s Mixer networking event on Tuesday, June 26, regaling the more-than 50 guests with tales from her past and tips for landing an item in her column.

Appearing without the trademark hat that graces the portrait accompanying her column, Garchik laughed about the impact the photo has had on readers. “People send me all kinds of comments about my picture,” she said. “Recently a reader told me I didn’t need to wear that heavy hat in the summer and should take it off.”

Garchik in person conveyed the same charm and civility she does in writing. “I do try to be polite,” she commented. “That’s how I was brought up.”

Born and raised in Brooklyn, she moved to San Francisco in 1971. She’s been writing a daily column at the Chronicle for 34 years. She was hired for her first job there on the phone, as a part time steno clerk assisting columnist Art Hoppe.

At one point, she saw a notice on the Chronicle bulletin board that someone she knew had been promoted to a more senior position. “I could do that,” she thought to herself, and went and asked her editor, Bill German, for a similar promotion. She got it, and her writing career took off.

The paper was looking for something light and fluffy to pull readers into the center of the front section. “I liked fluffy,” she commented. “And I liked making things. So, I started writing a column reviewing craft books.” It worked.

At that time, paper press releases arrived in the news room by the hundreds, every day. She put a carton next to each section editor’s desk and asked them to put the releases they didn’t want in the box. “I would pick up their rejects and get ideas to pursue from them.”

Eventually she worked her way into the columnist spot. “I have the best job in San Francisco,” Garchik said. “I love to write. And I can go to any event I want to, if the organizers want publicity!”

One of her many “best” experiences as a columnist was the afternoon she spent watching renowned cellist Yo-Yo Ma rehearsing ­—‑ and then speaking with him. “That was one of the greatest moments in my career,” she recalled. “He spoke with me for a half hour, and during that time he seemed unaware of anything else going on in the world except for our conversation. I had enough material to fill a whole column just from that brief conversation.”

Her advice for existing in the world:

Here are some tips for how to get an item into her column:

She responds to all her emails — her inbox is always empty at the end of the day. And she answers her phone, though afternoon is the best time to call since she works on her column in the morning. So, take note: 415-777-8426, lgarchik@sfchronicle.com.