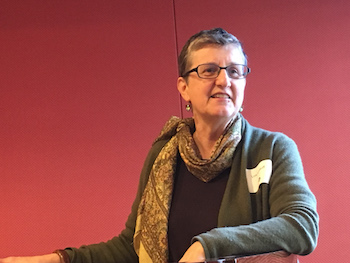 “Donald Trump will be good for the media business.”

Kazakoff spoke at the January 24 San Francisco Public Relations Round Table meeting, where she cited figures to support that statement.  For example:

Though the new administration is seizing headlines, Kazakoff emphasized that the Chronicle is a local and regional newspaper. The editorial page will continue to focus on issues that affect California — primarily San Francisco and the Bay Area.

In selecting items to run on the Commentary page, Kazakoff looks for three elements:

The key metric at the Chronicle is the degree to which a story or editorial engages with the reader. That was the driver behind their 2016 voter’s guide, which readers combed through to understand the 40 ballot issues coming up last November.

While she has been inundated with commentaries in the lead-up to and aftermath of the election, she’s still looking for good submissions. Weekday “Open Forum” pieces tend to be shorter, while weekend “Insight” pieces tend to be longer.

As with any news or commentary, the piece should focus on a real human being to show how the issue affects people. Tell a story, she advises, and give concrete suggestions for what the reader can do, such as vote, march, or other actions.