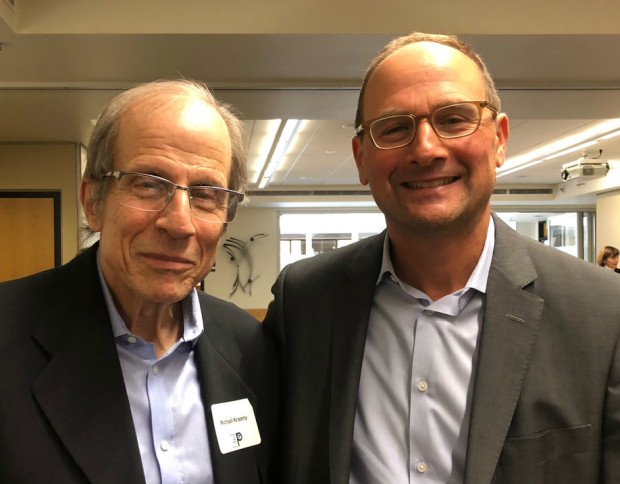 “You’ll never get rich in public radio,” Michael Krasny told the packed house at the August 28, 2018, meetng of the S.F. PR Round Table. “What you will do is make a difference.”

Krasny, the legendary host of KQED Radio’s “Forum” call-in interview program, has spent the past 25 years doing serious radio on “pointy-headed topics” designed to shine a light on subjects of interest to thousands of listeners across the Bay Area and the nation. His mission is to illuminate topics “at the highest level of discourse,” and to fulfill the goal of the Public Broadcasting System (PBS): to educate citizens.

Krasny hearkened back to his early days in radio at KTIM in Marin County. “I came to San Francisco in 1970 to teach literature and criticism at San Francisco State University,” he recalled. “After a few years, I had the urge to go into radio. I went to KTIM and proposed an interview program, with me talking to local people who were serving the public in interesting ways.”

He spoke on air with numerous people at KTIM, from dedicated, selfless individuals doing good for the community to larger-than-life celebrities. A woman who ran a hospice program stands out for her dedication and commitment. As does musician Jerry Garcia, who calmly unwrapped a packet of a white powdery substance during the interview. (Krasny intervened before Garcia could do any damage with it, and Garcia politely put it away.)

An interesting sidebar was that if you add up the viewers of MSNBC and Fox TV, NPR exceeds that total in listenership, per Krasny. “The secret,” he said, “is that we do good journalism.”

Because NPR is a ratings leader, the show gets many requests for on-air interviews. “We get about 100 books a week,” Krasny noted, “all of them from authors wanting to be on the show.” Even so, many of the people he schedules tell him that he’s the first person who’s really read the book before the interview (although these days, he admits, he may limit his reading to a few chapters).

Following Krasny’s talk, Dan Zoll, senior editor for “Forum,” provided tips on pitching ideas for the show. Some of them are:

1. They are live Monday-Friday, from 9-11 am. Krasny hosts Monday through Thursday, and Mina Kim hosts on Fridays.

2. The first hour tends to be newsy, and the second hour is typically authors or topics that are less time-sensitive than the news.

3. They generally do between two and four topics over the two hours.

4. They tend to book the second hour as much as a few months in advance. They put together the first hour the day before.

5. They’re always looking for interesting local people who are great talkers and storytellers.

6. Having guests in-studio is important to them. If you represent a public official or business, encourage them to come in for the interview — it makes them sound better and your organization look better.

What makes a good “Forum” show is material that reflects the diversity of the Bay Area. The guest should be able to handle provocative and controversial issues in a civil and responsible way. Here’s how to reach Zoll or any of the show’s three producers:

To wrap things up, Krasny reflected on how his curiosity is what drives him. When he stops being curious, he said, “maybe that will be the time to hang up the cleats. But I hope it never does!” — Phyllis Goodman