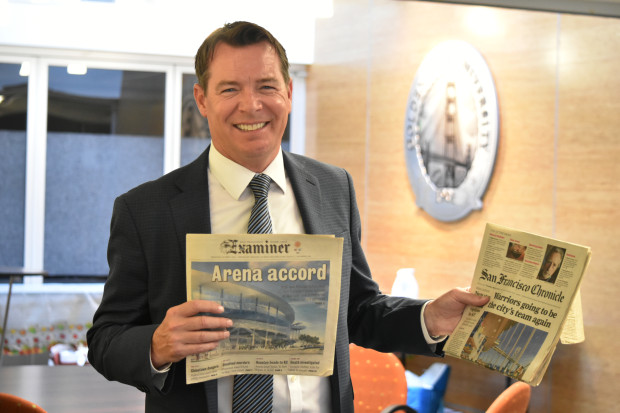 “It was like a once-in-a-career launch where everything sort of worked, and it was beautiful.”

That’s how public relations strategist PJ Johnston described the very beginnings of the Golden State Warriors Chase Center campaign when he spoke in October to the San Francisco Public Relations Round Table at Golden Gate University.

The media relations consultant was detailing his experiences both as press secretary to Mayor Willie Brown (beginning in the ‘90s), and his more recent role in leading the public relations campaign to construct the Golden State Warriors’ Chase Center, San Francisco’s newest sports, entertainment, cultural and retail destination.

But, as Johnston observed during the lunch, the early beauty of the Chase project quickly faded, beginning an epic battle that eventually led to last month’s first tip-off of the first regular-season basketball game.

The journey began in the spring of 2012. Johnston was hired to help the Warriors prepare for the launch of a return to San Francisco from Oakland, where they had been playing since 1971. Few people disagreed that Oracle was showing its age as a basketball arena. San Francisco was a world-class city, but the only city in America, of the top 25 cities by population, that did not have an indoor arena venue of 10,000 seats or more. As such, big concerts and conventions frequently skipped San Francisco. After shopping the Bay Area for a possible new home, it was then-Mayor Ed Lee who made the convincing pitch for San Francisco.

“He promised us he’d do everything in his power as mayor of the City to rally the government and the people of San Francisco around the project,” said Johnston.

The location would be Piers 30 and 31. The piers were in bad shape, crumbling into the bay. It was a significant infrastructure need for the city of San Francisco to repair that area. So it was thought to be a win, win situation. Controversy was not anticipated.

However, a couple of months in, things quickly turned ugly when people living along the Embarcadero and in Potrero Hill began coming out against the project. Naysayers included former San Francisco Mayor Art Agnos, who is said to have walked from newsroom to newsroom, and from community meeting to community meeting, with a sketchpad and a few notes, to talk about why this was an inappropriate location and an inappropriate deal.

“The more complicated something is, the more complex it is, the less effective your messages, and the harder it is to get your message through…,” said Johnston. “And [we] sort of felt this tide turning in the media to where Agnos was relishing the role of David versus Goliath, and we all of a sudden became Goliath.”

On top of that, the Army Corps of Engineers kept coming back with higher and higher estimated costs. The project was falling apart. Enter stage right, Senator Dianne Feinstein and Marc Benioff, CEO of Salesforce, with an offer to sell the Warriors 11 acres of former Redevelopment Agency land in Mission Bay. The Warriors ownership makes a deal to buy the property, and the ball is back in play. But then another block emerges.

“I get the call from Andy Ross from Matier & Ross,” recalled Johnston. “‘Hey man, get ready for this one,’” he says. It’s like Friday morning. I was hoping to leave town with my kids and my wife and have a good weekend. ‘You’ve got real opposition. And it’s not just any opposition. It’s all your old buddies.’”

Andy Ross was referring to a formidable group that included Mayor Willie Brown, Mayor Willie Brown’s former campaign manager, the former vice chancellor of UCSF, and veteran crisis PR guru Sam Singer, who announced plans to do everything they could to kill the project because they wanted the area to remain a medical area as initially intended. The group threatened to take the measure to the ballot box but stopped short mainly because, as Johnston surmised, they saw polling that showed enormous public support for the arena. So, instead, Singer and company launched an aggressive and emotional campaign suggesting the arena would cause overcrowding of downtown streets and that people were going to die in ambulances, trying to get to the hospitals…

Eventually, that final argument faded away, the UCSF leadership got on board (with the promise of having a seat at the table), the host of legal challenges was over, and one final appeal was rejected the morning of the groundbreaking ceremony with Kevin Durant on January 18, 2017. Five years after PJ Johnston began what he thought would be a shutout.