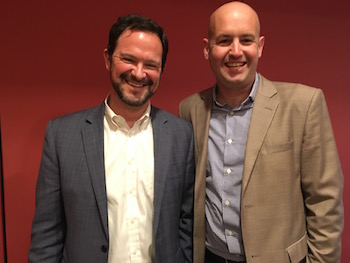 Alex Clemens and Boe Hayward are master storytellers. They are also sought-after public affairs specialists at the top of their game, having merged their two firms to form Bay Area-based Lighthouse Public Affairs.

Their potent combination of skill and talent was on display at SFPRRT’s February 28 luncheon.

Clemens opened the program by recalling how he, Hayward, and partner Rich Peterson, met at the Elks Club “where no one meets so you can’t be recognized,” to take a personality test around ethics and culture and discuss whether a merger made sense. They had been fierce competitors over the years, but also mutual admirers.  The discussion revealed many shared viewpoints about how to conduct their businesses. Conversation continued over several months until they agreed to merge.

“We took our time because we wanted to make sure the culture was a good match,” said Clemens. “It’s key to who you work for (clients) and who you work with (employees). And you need to love your job.”

Clemens and Hayward said it took more than 40 hours of planning to develop the communications around the merger of Barbary Coast’s private consulting practice with Goodyear Peterson Hayward lobbying firm to create Lighthouse Public Affairs. Out of more than 75 clients, the partners only dropped two clients that posed conflicts, and were off and running beginning June 1, 2016.

In less than a year, Lighthouse has emerged as a Bay Area public affairs powerhouse, adding approximately 15-20 more clients to its roster with offices in San Francisco, Oakland, San Rafael and Palo Alto.

Hayward shared an anecdote that depicted how Lighthouse thinks and operates. He recalled a recent hard-won victory for a Mission District-based housing development that was on track for defeat due to a well-organized opposition campaign.

Lighthouse proposed a poll of the district to assess how the rest of the neighborhood felt. The results surprised everyone with more than 70 percent of the district supporting the 300-unit housing development, which included 40 percent affordable housing. The firm counseled discretion and recommended that they share poll results only with key decision-makers instead of using them in a publicity campaign, which the client favored.

“We need to gain client trust to truly work effectively,” said Hayward. “That includes telling them things they don’t want to hear.”

Lighthouse’s recommended strategy paid off as government representatives greenlighted the housing project, confident in community support for their decision.

If You Ask, They Will Answer

Clemens and Hayward also fielded questions from SFPRRT members and their guests. Topics covered included the impact of money in politics; the future of San Francisco and 400 other sanctuary cities under a Donald Trump administration; and whether politics is really like The House of Cards television series.

Said Clemens of the latter topic, “I didn’t think so, but after November I’m not so sure.”

Both Clemens and Hayward said they stand by their ethics and urged others to follow suit. They believe that San Francisco, with its $500 cap on individual donations and ban on corporate contributions to political campaigns, is not a “pay to play” environment. “You need to walk your talk,” said Clemens. “If you say you’ll help the community, you truly need to do so.”