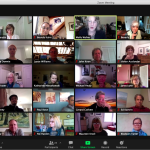 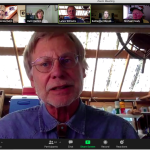 Lance Williams and Katharine Mieszkowski, both senior reporters with Reveal News (part of The Center for Investigative Reporting nonprofit), discussed what makes a good investigative report, and then provided a case history for a story they pursued together for several years beginning in 2013. PRRT Life Member Hatti Hamlin moderated the program. (Scroll down to watch the Zoom video.)

Mieszkowski opened the talk by considering the question, “What is investigative reporting?” Her five-point answer highlighted its key features:

1. Is it original? A good investigative story presents findings to which no other news outlet has access.

2. Can we quantify it? The story should present hard facts such as the scope and scale of a problem or issue, the number of people affected by it, the amount of money stolen, and so on.

3. Are there victims? Have real people been affected by the issue? Providing facts along with stories about people who’ve suffered help further the reporting.

4. Can we hold someone accountable? Identifying people whose actions resulted in the issue, and getting them to respond, adds substance to an investigative story.

5. Will it have an impact? The ideal outcome is that someone takes action to reduce or erase the negative impact of the problem cited.

Then, both speakers walked through their story that took place during a legendary drought in the state of California. Their three-part series, called “The Wet Prince of Bel Air,” revealed the flagrant overuse of water by a resident of Bel Air in Southern California, who was eventually fined for using more than 12 million gallons of water annually. This was at a time when citizens of California were being fined for watering their lawns more than four times a week, or watering on the wrong day, or allowing water to drip onto their sidewalks.

Likening their efforts to that of a “drought posse,” Mieszkowski and Williams methodically went about revealing public records and data about water use that were being cleverly kept under wraps by bureaucrats using various local regulations. By the time they had completed their investigation, the reporters had made several midnight excursions through parts of Bel Air where sprinklers were running all night; and, with the help of satellite images, had pinpointed specific locations where soil was unusually moist.

Most important, a bill was passed in 2016 stating that the names of violators of water regulations would become public. Previously, fines of $500 for every 750 gallons of water overuse had been levied, but without publishing the names of the offenders – one of the reasons it was so challenging to do this story. For more details of this intriguing “who done it,” watch the presentation here:

Lance Williams is a two-time George Polk Award winner and has been honored with the White House Correspondents’ Association’s Edgar A. Poe Award, the Gerald Loeb Award for financial reporting and the Scripps Howard Foundation’s Award for Distinguished Service to the First Amendment.

Katharine Mieszkowski has been a senior writer for Salon and Fast Company. Her work has appeared in The New York Times, Rolling Stone, Mother Jones, Slate and on NPR’s “All Things Considered.” Her coverage has won national awards, including the Alfred I. duPont-Columbia University Award two years in a row, an Online News Association Award, a Webby Award and a Society of Environmental Journalists Award.

—by Phyllis L. Goodman, Board Member