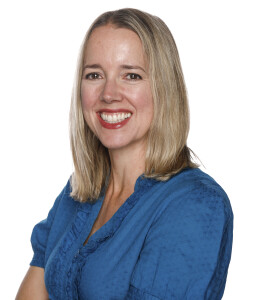 Responding to frequent requests from our members that we invite San Francisco columnist and Heather Knight to speak, we finally asked her whether we could entice her to come — and she agreed right away to join us. The PR Round Table will present Knight in a livestreamed conversation with Board Member Sarah Segal on Thursday, March 18, from 11:45 a.m. to 1 p.m. You can register to attend at Eventbrite now!

Heather Knight is the quintessential San Francisco journalist, writing about all the things that make The City, the city it is. Working out of City Hall (when she can), she covers everything from politics to homelessness to family flight, and she does it in a way that has garnered tens of thousands of readers and fans.

Recent San Francisco Chronicle stories have included “San Francisco’s cable cars are part of the city’s identity. We need a plan to bring them back soon,” “117-year-old St. Francis Hotel hopes S.F. tourism rebounds this year: ‘I keep telling people to hang on’” and “San Francisco school board is wasting time on ridiculous debates as students remain home.”

While many of our members don’t actually live in The City, we all do live in the greater Bay Area and we are all interested in San Francisco’s ability to survive and flourish. And the truth of it is that while San Francisco isn’t really like any other place, the things that aren’t working here probably aren’t working elsewhere. Please join us for a great conversation about how PR people can work with the media to make cities better — and whatever else you’d like to ask Knight.

About Heather Knight: San Francisco Chronicle Columnist Heather Knight covers everything from politics to homelessness to family flight and the quirks of living in one of the most fascinating cities in the world. She believes in holding politicians accountable for their decisions — and telling the stories of real people and their struggles. She co-hosts the Chronicle’s flagship daily podcast, “Fifth and Mission” and co-founded its program #TotalSF to celebrate the wonder and whimsy of San Francisco. Knight’s awards include Top California Columnist in 2020 from the California Newspaper Publishers Association; first place from the National Society of Features Journalism for 2019; first place for column writing from Best of the West in 2018; best education story in the state in 2015 from the California Newspaper Association and numerous other awards.